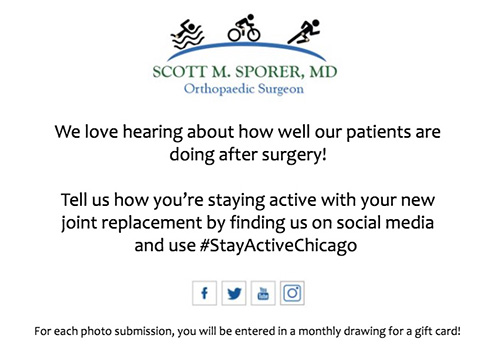 I was released from Rush yesterday after having a total hip replacement. Dr. Sporer was a God-send and anesthesiologist and his assistants were out of this world with their caring manner as were the surgical staff and surgical nurses. This did not stop when I got to the floor. I can't say enough about the nurses and the staff. This is nothing new, however, it has been like this every time I have had surgery at Rush, world-class health care that is worth the drive from the south suburbs. It is clean, the staff is caring and professional, and your pain is controlled. The food is healthy and fresh, so my hat is off to all of you at Rush University Medical Center for being so caring and nice to your patients. THANK YOU SO MUCH?

I had my hip replaced by Dr. Sporer on Nov 13th. I was # 1 of 7 he was doing that day. He is obviously a very popular surgeon, who is in great demand. For me, everything turned out perfect. My surgery was at 7:30 am and I was home by 4 pm. Absolutely no pain at all and I walked out of the hospital. I used a walker for about a week, and a cane for about 2 weeks after that. I only saw Dr. Sporer 2 times..... once on my initial consultation when he approved the surgery and scheduled it and again the morning of the surgery. All of my follow-up visits have been with his staff. I had no problem with this since my surgery was perfect and I had no complications. I was assured that if I had any complications, he would be more involved. I am so happy with the results of the surgery. I did not find it necessary to see the doctor for every visit. I felt that his time was better spent doing surgeries and fixing any complications. His staff was wonderful. Every part of this experience was wonderful. ( I should have done this sooner ). I would recommend Dr. Sporer and his staff to everyone. A nice touch they do was to send me about 3 texts a day showing me videos of exercises to do, and encouragement to continue. ( If you are reading this, I know you are doing research on hip doctors. Dr. Sporer is a good choice. Don't put it off any longer. I waited too long. He is very busy. It might be 2 - 3 months before you can see him, so contact him asap. )

My primary doctor is now at Rush. So glad that Dr. Sporer is still there since he replaced my knees 9 years ago. I am now 76 and want him in place in case something else needs replacement. My artificial knees allow me to really enjoy life. I am grateful. I walk. I dance. I lift wieghts. I do yoga. I travel. I have moved to a third floor apartment without an elevator. Thanks again.

Daniel Quealy, 65, of Clarendon Hills has always been active, having played organized sports from grade school through college. His competitive juices eventually led him to play softball and racquetball and participate in marathons and triathlons. All of these things made Dan feel alive.

Over time, knee pain became his ultimate challenge. It became so severe that he depended on a daily regimen of aspirin just to get through a day. Eventually, the pain reached a crescendo when he had difficulty just walking and couldn't safely carry his grandkids. That's when he knew it was time to ask for help.

Quealy carefully researched options for treatment. With several family members in the medical field, he repeatedly heard that the patients of one doctor seemed to have more successful recoveries. That was Dr. Scott Sporer, a hip and knee replacement physician at Midwest Orthopaedics at Rush (MOR).

My surgery went extremely well. My room was very comfortable and roomy. The care I received was excellent. My recovery went very well. My office visits also went well. Everyone was very friendly and accommodating. I would recommend Dr. Sporer and his team to anyone who needs a knee replacement. Thank you so much for helping me walk again.

After having both hips replaced within 2 years by Dr. Sporer, I strongly endorse Dr Sporer. He put me at Ease and both surgeries were flawless. I recovered from both surgeries within 6 weeks..Miracle!!! His staff, especially Lauren his PA were also delightful during the process and all follow ups. Thank you Dr. Sporer & Staff!!!!

I had a partial knee surgery ,two years ago. Still can't believe how good it feels ,able to play all sports. no pain at all ! Great staff and thanks -- , April. a real pro.

Took 2 months to get 1st appt, but when we met, felt at ease & confident in my surgeon choice right away. Full knee replacement in Oct 2014. Follow instructions, do PT religiously and it's all up to you on your outcome (IMO). Pain free from arthritis immediately, no surgical complications, scar beautiful (from what I've been told) & healing perfectly, Central DuPage Hospital fantastic. Following surgery, I meet w/ his PA, who spends MORE than enough time with me on questions, prognosis than Dr Sporer probably can. Never rushed when seeing her.

I am so delighted with the out come of my hip replacement done by Dr. Spore and his staff. I was in the hospital only one day following my surgery. Received home health care as well as outside physical therapy. Through the whole process I experienced very little pain and am walking normally with no variance in both my legs length. I am back to my old self active and enjoying life. From a scale ranging from 1 to 5 with 5 being the highest. I would give Dr. Spore and his staff a 5 Thank You..

I will choose this Dr if I have to have my hip done. He does wonderful work had surgery Jan 6 ..a week later I was walking with cane only for balance. 3weeks later I was walking into PT with no aid. The scar is so minimal. The entire hospital staff was exceptional. What a great group of people. Great customer service. I admire all of you and intend to write the Dr and hospital with all of your names. Thank you!

I'm writing this review after 1 year for one total knee replacement and two years after the other total knee replacement both surgeries performed by Dr. Sporer. My knees are functioning beautifully, are pain free. Besides being able to walk everywhere, I'm now able to alternate feet going up and down stairs, something of which I had been unable to do for years. I am 74 years old and had osteoarthritis of my knees since my early 30's. My only regret is that I didn't have my knee replacement surgeries sooner. I would highly recommend Dr. Sporer.

I appreciate the professional and prompt response from Dr. Sporer and his staff. I would and have recommend Dr. Sporer for knee replacement. Dr. Sporer saw me twice in the hospital after surgery and in the office after that. Thank heavens Dr.Sporer was recommended to me. My recovery was far better and faster than I ever expected. I was walking totally unassisted 5 days after surgery.

People listen, this doctor and his Dream Team of a staff, gave me my life back! I need 2 total knee repacements. My 1st visit with Dr. Sporer was refreshing! He told me my prognosis, and answered every question. He didn't suggest unnecessary precedures, that would only raise my medical bill. I was in so much pain and frightned of the unknown. However, he and his colleagues / staff, from MDs, PAs, to the clerical, were there with me, supporting me all the way! Now, I'm walking, exercising, playing with my kids, and NO MORE PAIN!!!! Dr. Sporer and his Dream Team ROCKS!!!

Dr. Sporer did an emergency revision of a failed hip replacement due to broken femur. I later had him replace my other hip. The 2nd replacement was so different recovery wise from the first. I am more pain free than before the surgery. I would recommend him to anyone needing surgery.

Excellant Doctor. Had both knees done within 8 weeks. Recovery was great. Pain control was good. Follow up was easy. He showed he was concerned about me. Staff was courteous and professional.

I thank God this doc went to school for ortho speciality. I can walk again, without pain!

I had seen several doctors and everyone told me nothing was wrong. Dr. Sporer listened to me and fixed my problem. I am very impressed with his surgical skill and the pride he takes in his work.

DR. Sporer worked me into his operating schedule at the last minute for my total knee replacement (which I appreciated immensely). But really, what one wants in a surgeon is competence & caring, and he is both. I had both knees done by him, 2 months apart, and my results were outstanding! The pain management was superb--I had very little post-op-and I barely needed rehab at all, since I could walk immediately and had a good 90 degrees of flexion within days. Can't recommend him highly enough!

Excellent physician. Very caring and compasionate. I recovered much faster than all my friends after my surgery.

Dr. Sporer gave my mom the chance to walk again. She hadn't walked for 2 years and now she is able to come to her grandkids games.
Thanks!

at 50 yrs old i was a bit young for hip replacemants but i sure needed them. i had spent a year with a different orthopedic group trying to figure out if it was my back or hips that were causing the pain, dr sporer said i had to have back surgery first and sent me to see his partner dr singh when i asked for a referral. that surgery went well and then i had my hip replaced 5 months apart-i wish i had had it done years before, now i can keep up with my grade school kida and am back to work as a nurse.

Dr. Sporer literally gave me my life back by performing a successful total knee replacement. After 3 unsuccessful surgeries with my prior doctor, I was skeptible about seeing any ortho. Dr. Sporer has restored my confidence in doctors. I know I'll need a knee replacement in the coming years on the other knee - I have no qualms about having Dr. Sporer do it. Thanks, Dr. Sporer!